So I have always felt out of place on Veteran’s Day around here, where I live. In fifteen minutes by car I could be at the Pentagon. The other direction, I could be at Fort Belvoir, an army proving ground. Another thirty-five minutes from Belvoir and I would be at US Marine Base Quantico. In scant over an hour, I could be on the doorstep at the United States Naval Academy.

We are a civilian family, surrounded and befriended by senior officers, both active duty and retired in all the branches of the United States armed services. These people are some of the nicest and most dedicated people you’d ever want to meet. Their sworn oath to protect and defend has no bias or prejudice. Many have seen “action” in Iraq, Afghanistan, in Bosnia, in Viet Nam, in Korea, in the Pacific, and have proudly protected our ports and shores at home. I adore these people, I adore their spouses and children. I am grateful beyond measure for their service and their sacrifices. Yet I feel awkward around them on days like today.

I am grateful beyond measure that I don’t know anyone who has died in active duty and I know, living around here, that’s an anomaly. Maybe it’s because I know senior officers; but I know, boy do I know, that their knowledge of active duty deaths more than makes up for my supposed deficit.

I also used to think that I had no connection to the wars other than seeing my friends’ faces when they came back from their tours. I remembered earlier today, thanks to a bag of old family pictures my dad gave me in September, that I do have a connection. My great uncle, Anthony J. “Bud,” McGowan, Jr., a young tank corpsman, whose troop landed in Normandy immediately after the initial invasion, died in the war. Bud’s given name was that of his father’s, my great grandfather Anthony J. McGowan who hailed from Ireland.

Bud isn’t exactly a straight great uncle; my family’s story is one of those, “come again?” stories but here’s the super fast: Great grandfather Anthony’s first wife Sarah was my great grandmother. They had my grandmother and her sisters. Sarah died after returning from a trip to Ireland. Anthony sent word back to Ireland and Sarah’s niece Delia came to America to help raise the girls. Anthony and Delia married and then had seven more children. Bud is from Delia; my grandmother is from Sarah.

Ok. You’re welcome to re-read that a few times. Look, I know because Delia and Sarah were related, that the lines are even slightly more complicated than simple half-sibs, but I’m content to leave it at that. I have relatives with whom I can be both a cousin and a niece simultaneously.

My approach the photos and letters was bittersweet. I couldn’t give them enough respect, yet I couldn’t wait to learn more, and I knew there wasn’t a ton. I remembered my father showing me the collection of letters from Bud and he said, “Oh boy… There he is, poor guy. Poor Bud. There it is…” and he folded it up and we looked at more photos.

As I was going through those old pictures today, I remembered my father, a newspaper journalist and excellent writer in his own right, wrote a Memorial Day piece about Bud a few years ago that appeared in my hometown’s newspaper, in Buffalo, NY. I asked Dad about it today, and he told me this:

I wrote that his mother, Delia, would go downtown to the newsreels to see if they might have a scrap of [footage] Bud alive after the Normandy landing. It was heartbreaking. You have a picture of him there, [in the newspaper piece from 1944] as you said. Otherwise I didn’t know what he looked like.

I have better than a picture, I decided. I have some of his letters, pieces of him. The letters I have are those he wrote to my grandparents, my mother, and her brothers when they were children. Bud would have been in his very early 20s when he enlisted in January 1942. He went overseas in August 1943. In 1944, my mom would have been 10. He wrote these letters to my mother’s parents before he went overseas.

Seeing them today, when we have instant everything and can shoot a digital video on a phone and send it over the air to Iceland where it can be seen on another phone; when children aren’t being taught cursive in school anymore, it’s a lost art; and when actual words like “swell” and “top shape” were used often as “LOL” and “OMG” are today, I become nostalgic.

The letters make me grateful. They are private only because they’re personal. And by “personal” I simply mean: written to specific people; as you will see, nothing is scandalous. They make me wish for a simpler time. Without war. I don’t think I’m alone in that, you’ll see what I mean when you get to my grandmother’s letter that was returned.

Some context: ‘Bub’ is my grandmother’s nickname, she was Bud’s half-sister and maybe 10 years his senior; “Bill,” is her husband, my grandfather. Their children, “Mary Joan,” “Billy,” and “Peter” are my mother and her brothers, respectively, Bud’s very young and possibly only niece and nephews at the time. Well, ever, for him.

This is a post card from his time at training camp at Fort Knox, KY. It is dated February 7, 1942, about a month after he enlisted. He was preparing for his barracks inspection the next day.

The next letter I have in my records is dated seven months later. At the PS you will see that he explained why he couldn’t use ink.

page 1 – this final line on this page, “I suppose it’s silly to hope I never have to shoot but I do” touches me.

This letter is addressed on the envelope to my mom, who was just seven and a half years old at the time. I love his encouraging words and how he asks for prayers and promises some back. He must’ve been a terrific guy, to be so upbeat to his precious niece and nephews, telling them to be good when he was so new to the army.

Here is another postcard from his training at Camp Polk, LA. He writes of starting maneuvers in the next month or so, which “ought to be something like the real thing,” he said. 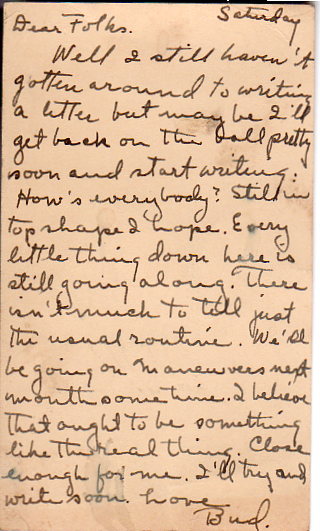 Imagine: he talks a bit about his neglecting his own letters home. I am guessing this post card was sent between the first two missives, but I don’t know. At this point, although Bud might think his notes are boring, they are not. I love his sense of “well, here I am…” and to me, writing that you have nothing to write, is still writing. The writer is considering you and your involvement; the writer doesn’t want to waste your time.

I don’t have much for about another couple years. He must’ve shipped off to Europe then. I have just two more separate items that can help tell the rest of Bud’s story.

On August 21, 1944, my grandmother wrote him this letter. I don’t have a copy of the letter she references that he sent to her on August 8, 1944, two months and two days after the formal invasion. “Berta” must be a nickname for Roberta, Bud’s sweetheart; Paula and Nancy are two of his sisters, referenced near the end of the letter:

Page 4. You can see her signature on the bottom left of page 1. Seeing this makes me miss my grandma, “newsy news.” I can hear her. I really loved her. Her references to “your mother” when speaking to Bud about his mother is how she was, very proper and respectful.

Bud never read that letter. It was returned in the envelope below because seven days later, on August 28, 1944, he was wounded. I imagine the letter was in transit before he died and it didn’t reach him.

I don’t know when my grandmother received the envelope that held her letter above. Its jarring tell-tale stamp, “DECEASED” on the left side and the iconic “Return to Sender” stamped on the front give me pause.

And in October, he was written about in the city paper.

Bud’s picture is second column, lower right. You’ll read that he was engaged to be married. I see my brothers and my sons in his face. I see my cousins too. I see a life taken too soon and a man who, like too many before and too many after, never saw his people before he died. He died on September 4, 1944: two years to the day when he wrote the letter home to my grandparents and said of his nephew, Peter, “I’ll bet he’s getting awfully big & probably won’t even know him when I get home.”

The postcards themselves are in good condition, just yellowed, as you can see. And the envelopes are sound. their condition, better than anything else in the pack of family memorabilia is in the best condition, for obvious reasons. Why I am the lucky one to have this stuff is still a mystery, but reading these letters and seeing his face helps me remember that I am attached to Veteran’s Day, and Flanders Field whether I like it or not.

Thank you, Bud. Rest in peace.

I have many other family service members to thank for their dedication, and I am grateful to them all.

Veteran’s Day. I could not possibly improve on this.

Under the big lights Shadows stretching long The ramp is lowered gently to the tarmac And all of us, we wait In this sea of gravity For the precious cargo to appear