So today, I got more than I gave and I gave a lot. I received more than I could ever hope to provide.

We talk in mysteries sometimes, about how “the universe provides.” How things work out, no matter what, even if the end result (so far) is not what we would have preferred. We talk about being “less-than” or “good enough” or “better than we deserve to be.”

Today, I was a moth, drawn to the inextinguishable flame of Survivor-hood.

Today, I participated, on some infinitesimal scale, in a program to give to a group of women who have never given up; to women who have kept on keeping on.

Today, I felt like a faker because I was able to supposedly give a gift to these women, Survivors all of domestic violence and sexual violence.

I thought I was brave.

I thought I had guts.

I thought I had seen suffering, survived it, eclipsed it. And in my ways, I have. But I was never PROUD enough to come out, as these women did, and said (without uttering a word) that they experienced it and are winning.

These are proud women.

These are strong and fierce women but they are fierce in a way that rejects aggression, fear, anger and self-pity; they don’t have time for pretense. They are on their way.

Every sixty minutes, from 10am to 3:30pm today, I was able to show (because I can’t say “give”) these women another gift they can give to themselves: the gift of gentle, loving, simple yoga and the gift of mindful meditation and self-awareness. What I was humbly offering, on behalf of The Duffy House Project (http://www.theduffyhouse.org) at its 5th annual “Day of Pampering” was facing stiff competition from other amazing services: complementary hair styling, mani/pedis, massages, housewares, shopping spree for mom and kids (clothes, shows, hand bags, suits), toy store, book store, child care and activities during these services, and prayer, but I was thrilled to be able to offer my services to even one person. Every ounce of everything today was donated by people like me and local businesses.

I prepped last night. I didn’t know what to expect. It was the first year I’d committed to The Duffy House (twitter @TheDuffyHouse). I was uncomfortable the first time they asked, I didn’t feel like I would be of value, I felt like I wouldn’t know how to talk to the women; like that their situations meant I wouldn’t be able to relate to them, that just because I wasn’t a survivor of the trauma they surmounted, that I wasn’t kin; that we were separate.

I know that might sound wrong, separatist, detached, even snobby, but the opposite could not be truer. I simply wasn’t being honest with myself. I am no luckier than they; I just had trouble admitting truths to myself. I’d spun my experiences to assuage my pain and hide my shame, shame that didn’t belong on me and shame that has no place on anyone but the man who’d taken advantage of me years before I cleared my head, made healthier choices and met my husband. But I am not here to talk about that; I’ve made peace with it all.

Nothing changed from then to now, other than my willingness to see my truth, walk in it and honor it and then when the time was right, as it was today, to give myself to these women and take the chance to move my own insecurities out of the equation. If I couldn’t muster the confidence and self-belief to give myself to these women, then I was not worthy of their time. I could not be a healer.

So I packed up eleven yoga mats, nine books, my Tibetan singing bowl, a stick from my yard that I found first step out the door this morning to strike the bowl, my iPod, my sound system, my truth and my courage. 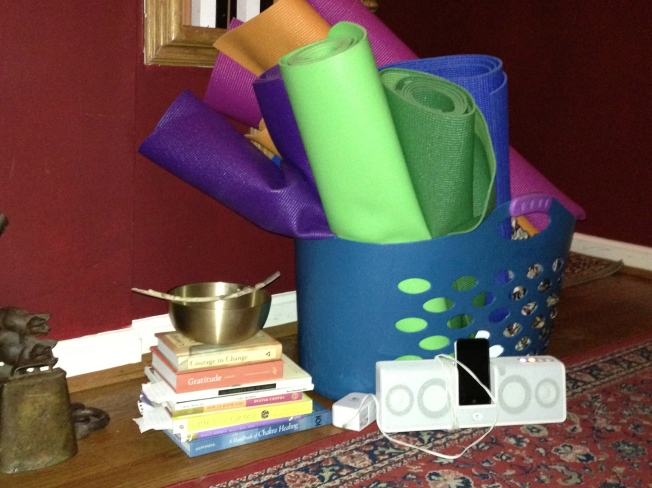 the yoga mats are courtesy our school PTA. i use them to teach yoga to some 6th graders in the spring.

The room they gave at the church for the yoga was sublime: it was cozy, dark and away from the joyful noises upstairs. The lamp in the room needed a light bulb, so I borrowed one (and just remembered I forgot to put it back) from a lamp in a meeting room down the hall. It was IDEAL, it was like a dream mini-studio to me. The lamp with the borrowed bulb cast a loving warm glow in the tiny room. I couldn’t believe how lucky I was.

Another yoga practitioner, Sheila (fake name), was lined up to join me in leading the women and we were going to alternate every 30 minutes. After the first round, Sheila and I had determined that 30 minutes was OK, but 40 minutes would be better. We were not as busy as I would have hoped, so if the women had more time between the other services they were offered, we took advantage of the cushion and spent more time with them.  I would say the other provider and I practiced yoga with about 20 women and all the while, it was me and Sheila who got the gift.

My iPod played meditation music all day and I used only one book. I used the bowl three times and I unrolled five yoga mats that Sheila and I shared for the Survivors. I read a meditation on “assertiveness” to the women as they laid in the darkened room, their palms facing the sky to accept peace and give strength and when I stopped, I heard sniffles and I was honoring my own throat’s lump. Some women told me that reading was exactly what they needed to hear. So I made copies and handed them out after lunch and left them on the tables. They were all taken up when the day was ending.

As the afternoon wore on, the lobby of the church where these Survivors stepped in to receive their services was getting crowded. Gift bags and backpacks and balloons and trinkets were waiting for all the women and their children who’d honored us with their courage and trusted our hearts and hands and thoughts and energy. 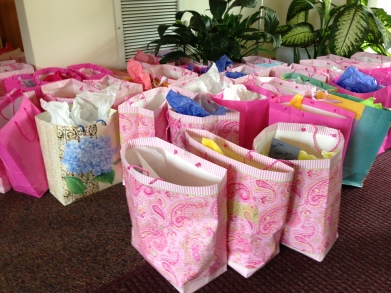 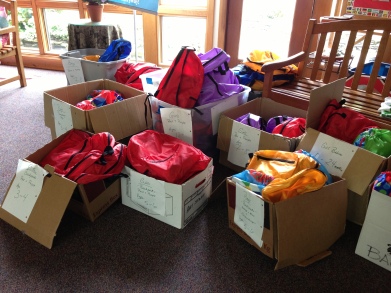 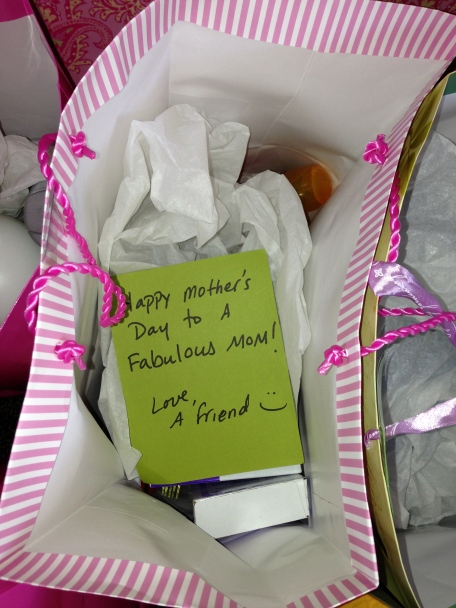 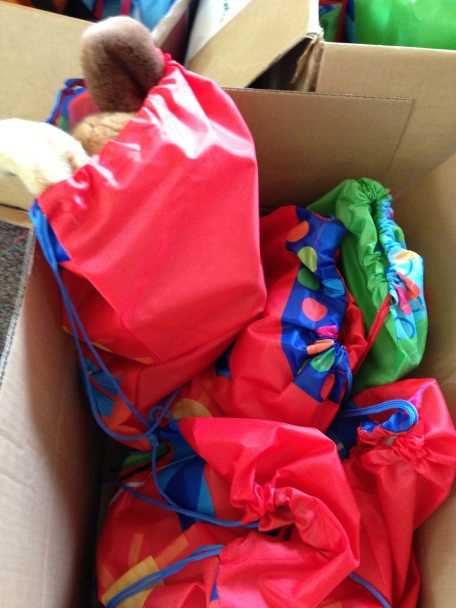 I had the opportunity to speak with some Survivors; some were so transformed by changing their own lives, I’d mistaken them for service providers. Some were still quite broken and sad and I just sat near them in silence and honored the guts they’d shown me by not only persevering but by getting up and getting out and coming there. They could have stayed in; they could have stayed away, but all of them, just by being there, helped everyone else under that roof. The energy was authentic and spirited; the women were in their own way already in their peace.  The other women in the neighborhood, many whom I’ve known for years, were on hand to help out, drive, be logistically available, run errands and keep the kids in check. This wasn’t an event for just the Survivors, this was an event for all of us and its effects are long-lasting, cementing, and so nurturing. I can’t wait for next year.

I’m not here to talk about Mother’s Day. Having a productive uterus does not a mother make. You can “mother” another human being, even a man can, just by being decent, nurturing, kind, patient, genuine and forgiving. As I said in another post about mothering long ago, “If your person [mother] wasn’t there for you to begin with, become the person You’ve Been Waiting For.”

Today, was no ordinary day and I am all the better for it.