Yeah, I get it; I’ve been quiet around here. I don’t know if you’re noticing, but I am noticing and I can’t really go too deeply into it in words, so I’ll share some pics to explain my physical whereabouts. Intellectually, I’ve been busy. I’ve started with a new therapist to work on some stuff and it’s great what’s happening, but it’s really deep and it’s extremely healthy for me and the kids and my marriage, which is solid, but a little hard work on the self does wonders for the team.

So yeah, the latest huge update is that we got this:

The kid is optional. The water is not.

And it’s been great. But before we could put our kid in it and eventually fill it, we needed this to happen:

This was hard for me to watch; but I was like a moth to the flame. I could not look away.

The hot tub is great. As you can see from the pictures it has lots of different jets and I have named them all: Neptune, Poseidon, Sven, Maximus, Weekend in Thailand, Trevor and Jet.

And so about four days later we went here:

GW Bridge en route to Manhattan. It always makes me nervous when we have NO traffic going to NYC. Surely there has to be a crisis somewhere in the country’s largest city, right?? Not that day.

Whenever we use that bridge, I insist on taking the upper level; I don’t care if there’s a delay. My thinking is survivalistic: if the bridge were to collapse,  cars on the upper level would crush the cars on the lower level. Hey, don’t judge.

Only the best Irish pub in the city.

Which is so cool it has this: 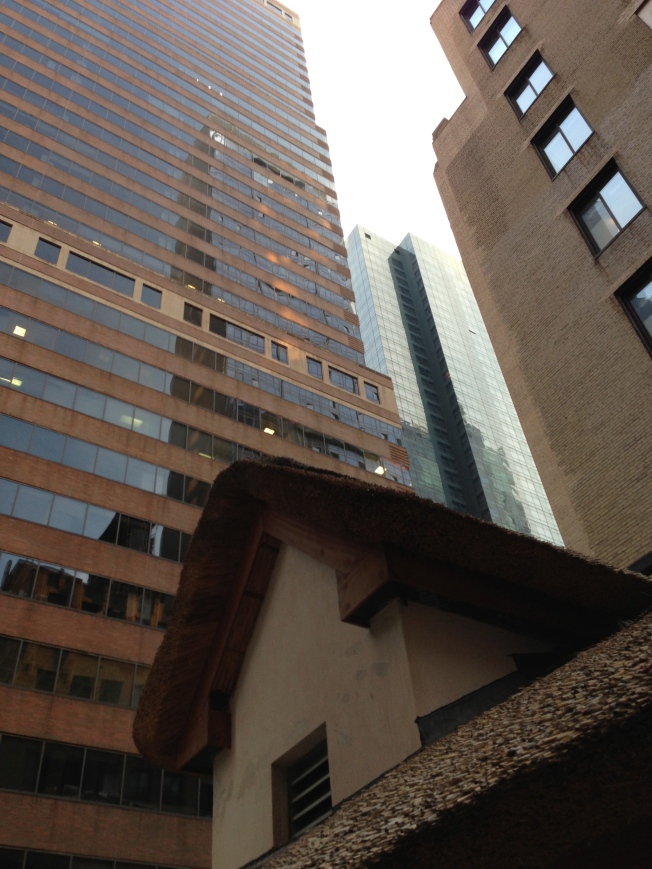 We were there to celebrate someone who adamantly refused it was a birthday party. In NYC’s hottest day of the year, it was 94˚ on the roof. But this survived:

Ice sculpture of musical notes which dripped cold water all over the shrimp. I took this early; it lasted a while, but we needed to get on those shrimp fast. (I don’t know the woman; but isn’t she lovely?)

This was what was going on downstairs when the sun started to set:

The band is called “Naked Soul” and they remind me of Michael Jackson, Maroon 5, Bruno Mars, Earth Wind & Fire and honky-tonk Rolling Stones. They are geniuses. 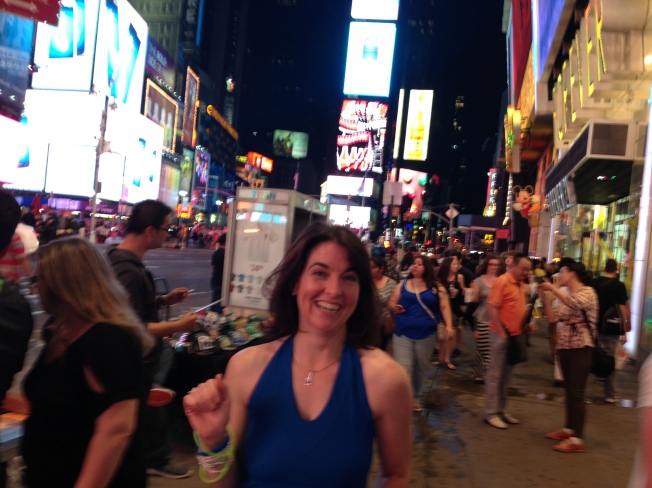 This is the least bad pic of me of the series of this moment. I don’t know any of those other people. I know, shocking.

Then the next day, we celebrated the previous evening’s amplified music with a night of unplugged acoustic music with some wonderful people, fantastic steaks, wine, and friendship under a canopy of stars.

The mascot of the previous evening, a stuffed formerly alive African jackal. Don’t ask. If it were alive, we’d all be dead now.

But just before the hot tub and the trip to NYC, Mr. Grass Oil and I made these:

Corn holes! Summertime’s favorite game! I painted the designs based on the patterns I found for the bags. I also made the big bag for them all to be stored in. Read below for more details on this project.

Uhh, making a corn hole game set is NOT, I repeat, NOT for easily distracted or easily annoyed. My husband has nerves of steel (he married me after all) and he diligently worked on the set every weekend for about a month. He also took lots of runs and long bike rides because wood has a funny way of NOT OBEYING HUMAN DIRECTION and that was very frustrating. I have a ton of pics devoted to the entire project. When we first started it, I was very romantic about it all: “Oooooh, this is going to be so great; family time and summer! I’ll chronicle the process for the kids and they’ll remember them and they will fight over them after I die because there are only two boards but three kids…” yeah.

Being the only uterus in the house, I determined that I would pick a whimsical pattern for the bags and make them myself. After some “What?!” moments about the paints I wanted to use, we agreed on what I call “Super Hero blue” to be the background color. I am the artist, I am the steady hand.

After Mr. Grass Oil’s fantastic workmanship, measuring, cutting, sanding, wood filler, primer, paint and several layers of Super Hero Blue and painter’s tape and all the rest, we were ready for me to do the design. I didn’t want to cover the entire board with tons of little popsicles and flip-flops in a triangular pattern, so I thought for literally about 10 seconds about it and I determined that a stacking-the- cans-in-a-pyramid design was the best way in and out of this. So I did six popsicles and six flip flops, based their colors loosely on the designs on the bags and wrapped it up in about 6 hours.

The bag making. OY. I. No. Look away. No. I really, should never be allowed to use a sewing machine. I should’ve just sewed by hand. Why? Because I can’t sew with a machine. Some machines help us: refrigerators. They keep things cold; we humans could never do that. Sewing machines? If I were in a sweat shop, I’d be fired and selling myself. I fight the machine. So I used it anyway, and what did I end up doing in the end? That’s right. Good old-fashioned blanket stitches all the way around each little sack. Don’t fill them with corn, you don’t have to be a purist. I filled mine with the same amount (one cup each) of aquarium rocks.

I also managed to do this to myself: 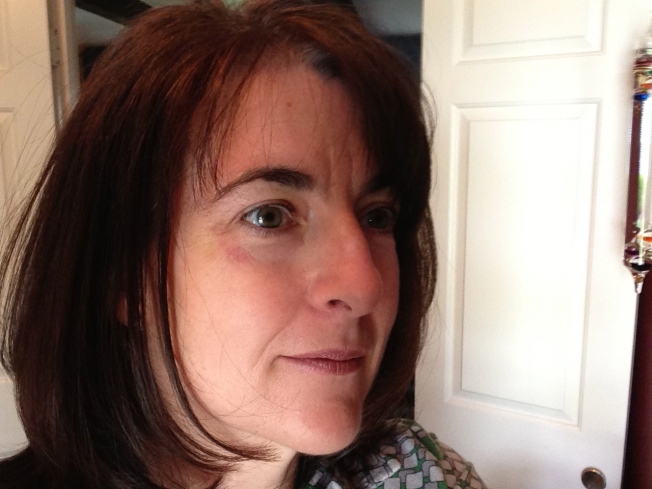 Only I am talented enough to hit myself in the orbital bone ridge / face with “settling stones.” I thought you’d get a kick out of it; my kids did. Read below…

So I’m big into meditating and yoga and all that woo-woo, frou-frou stuff.  A couple years ago, a like-minded friend was so sweet. She gave me a pair of “settling stones” that I just learned you can’t buy any more… maybe that’s a good thing because of what I did to myself with them:

Settling Stones also known as “nocturnal flying death blinders” from http://www.peacewaters.com – go here for the product info and then you can laugh at me: http://www.dailyom.com/cgi-bin/display/product.cgi?pid=406

Long story short: it was mother’s day night. I was ready to hit the hay but I also intended to use my stones to help me … settle. So I placed them on the folded-over top layer of my bed blankets (I’m typing slowly so you can follow me) I was reading a book by Pat Conroy, South of Broad, I highly recommend it. And I was captivated by the book. I forgot about the stones. I was exhausted by the book too. I had read so much. So I put down the book, turned off my bedside light (are you still with me?) and I forcefully pulled up my duvet and the rocks went flying and one hit me square on the orbital bone of my right eye.

It was midnight. My husband was sleeping. I didn’t want to wake him. So I whimpered and rubbed and massaged and whimpered and silently laughed at myself because only I, Molly Field, would end up injuring herself with benevolent rocks. Almost three weeks later, the bruise is gone, but the pain is still there and I have a tiny welt in the skin from the impact.

So back to the NYC trip. We got back from that at 5:15pm. So we unloaded the car, changed clothes, got a bite to eat, started a load of wash, let out the dog, and then hopped back in the car because we had to be at a pool party at 6:00 for the crew team. One of the dads has a speaker system that could likely destroy shanties in any seaside village, so that was really loud. At about 8pm we returned home utterly spent, exhausted, deaf, tired, fatigued, and just basically wiped out.

Then, the next day, my beloved took me here:

Oh how I LOVE Patty Griffin! She is so great and real and warm and tiny and has such a huge voice that I think my ears are permanently damaged.

So it was almost four days of continuously loud music. I feel like my ears are those of my dead grandmother’s.

And then we had company from out of town stay with us from Tuesday to Friday and soccer tryouts (didn’t make the team — hiss). And now it’s Saturday and we have a graduation party to go to and a soccer practice for the all-stars game next weekend and I haven’t written any fiction for yesterday but I’m good. So, thanks for asking. Busy time of year. Truly. But it’s been great.

I hope you all are doing super fantastic awesome and are happy, healthy and smiling.