So my mother went to God Monday afternoon.

I am a writer. This is how I process. One side of me feels this is maudlin: don’t share private stuff. I hear hisses, “you’re looking for attention.” But the fact of the matter is that I don’t really care about anyone’s opinion about how I go about my processing. I know that the people who love me and who know me either by my writing and also in my carbon-based life form, that you know I’m pretty solid in being who I am and that I don’t need attention. I am a doer. I am not a navel gazer by nature, but sometimes it happens.

I started this post Tuesday morning after walking my youngest son to his first day of 4th grade through a vast jungle because the county is renovating his school, and once we got home, I was determined after talking to a friend, that I would write about how things are. I sat on my deck amidst cicadas calling for their mates in a last-gasp attempt at breeding. I was safe beneath the market umbrella shielding me from overzealous early acorns. It was elemental. I was in a cocoon.

Monday morning, I was writing about the strange BBQ-induced dream I had about Queen Latifah in NoLa. I spent better part of that morning reading an essay with my oldest son to help him with an English project. We got donuts that morning.

I was sitting on the deck with my husband when my father called. He tried the house line first. Naturally, we couldn’t find the handset, so no one could answer the call and we hate speaker phone, so we missed his call. As we scrambled to find the handset, he called my cell. He was very calm.

“Your mother is on her way to the hospital. She has had a heart attack, so say the ambulance workers….” I repeated the words. Dan held my hand; my body began to tremor. “This is it.” I thought. I knew.

My husband grabbed the keys; I started texting my brothers with the news of the heart attack. My neighbor came over to be with the boys and we drove to the home of my raging adolescence not 10 miles away. A place I visited seldom because of all the emotional weight it had.

My mother is dead. Gone to God. Up with the angels. Singing show tunes and stalking Liz Taylor and wearing fantastic clothes — truly she had amazing taste.

My relationship with my mother was complicated. She was troubled. Lots of anxiety, depression, self-medication, alcoholism. I don’t say these things to speak ill of her; for I know that these were facts of her life. Despite all these things, she was alive in the way she knew best how to be. She served her interests: the arts, theater, Broadway, Moliére, Monet, Shakespeare, Graham Greene, Danielle Steele (she was human!), Italian food, one-act plays. As anyone knows who deals with anyone with an addiction: it is not just something they do; it becomes them, part of their very basic cellular being.

Sunday night Thing 3 and I were watching “How the Universe Works.” I planned to get my son some picture books of Hubble telescope images; we share a love of astronomy and the Universe.

Mom was ethereal. She had one toe on the ground. Just one. It was what she could manage most, because her brilliant mind was in her interests and tending to her anxieties. Yet I was two boots, solidly, defiantly planted three inches into the earth. Level headed… Always wondering about her: Who’s in there? What are you thinking about?

My toes? One foot’s toe was always tapping, expectant, waiting, hoping for a transformation, a return to earth. My older brother noted proudly yesterday over Thai food for lunch that our family of origin maintained its mass of 5 people for 42 years; not an easy feat no matter how chaotic the tribe.

Her death was entirely sudden. She was on her way to the car to ride with my father, her husband of 51 years and mate of 59 years, to the ice cream parlor. My mind is sweet with the idea that she died awaiting fudge ripple or a root beer float.

My cousin took these pictures coincidentally about the time my mother died when she was out and about my hometown of Buffalo, NY. My cousin likes to take pictures on impulse, on instinct and intuition.

look at that little orb almost perfectly centered (that was like mom, a little stage left all the time). 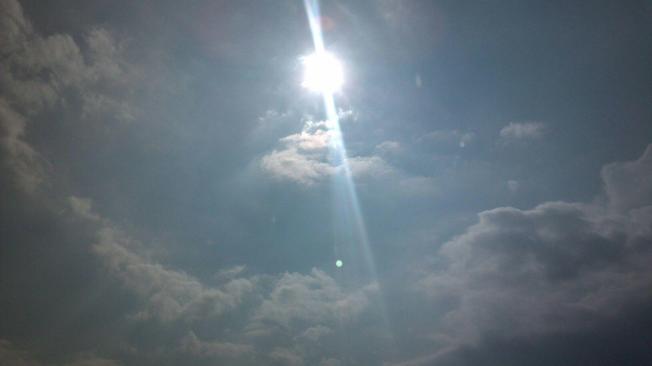 Now I am arranging with funeral directors in Buffalo to arrange for the transport of her remains, her shell, her corpus, for its final rest in her hometown nearby her beloved aunt and I hope my brother John whom she never met. John has been on my mind for years. I don’t talk about it much, but I wonder about him. They are together now, she has waited for this.

I am in and out of rationality. Up and down. Believing in God and forgetting about God. Believing my Catholic stuff and heaving it at the same time. She was ready. Her body was ready. Was I ready?

It was like we were having a rationality contest Monday in front of the doctors and the police officers when they were telling us again and again how it was that my mother died.

“She wanted ice cream,” I muse silently to myself. It doesn’t matter how she went. Her pain was infinitesimal. She went the way all of us wish to go: with a good thought on the mind and a merciful shut down of the heart.

He came in with his update. He started talking about where she was, the accurate location. I grabbed my phone to start plugging in the address on its GPS. “I’m sorry, can you repeat that hospital name?” I wanted to go see her. Tell her we were there, it would be alright. My husband heard all the officer had to say; he insisted my father and I stop what we were doing. He said to listen. “Mary did not survive. I’m sorry,” the officer said.

It did not compute. “I’m sorry” computed, but the rest did not.

When he said, “Mary did not survive,” I had a nanosecond of relief. “Mary? Who is this Mary? I know only Mimi or Mom.” Then I said, “Mary?” and he said, “Your mother. She has passed.” And all of the fluid evaporated from my organs and went straight to my eyes. I am drinking water constantly, none of it quenches.

I had a feeling. For a few days. I thought last week, “I don’t know if she will make it to my next birthday. I don’t think we will be together this Thanksgiving.”

Noises are too loud. Lights are too bright. Questions, even “When are you going up to Buffalo?” seem too probing. Emails about anything but this situation seem intrusive, selfish.

When I was first married, I would tell people, “We’re on our honeymoon,” and they’d give us a free appetizer or a drink or a better table. When you have a baby, balloons festoon the house.

When someone dies, you don’t really get to say anything; there is no physical or outward sign. “My mother died today. May I have a milkshake?” was what I wanted to say at Baskin-Robbins near the hospital where I viewed in a vortex of cognitive dissonance her 79-year-old yet ancient corpse. “That is just her box,” I said to Dad. He nodded violently.

I look back at the last 7 months and I sense that God and I have prepared myself rather eloquently for this. There were new tears in the family fabric over the spring. I went back into intense therapy to deal with some of them. Toe tapping. Expectations. Expectations that were not unreasonable, but expectations that were considered hostile. Proper care, better care, more care. I exerted myself and executed a boundary. I was cut off because of it. It’s ok… it’s part of the passage that got me to here, where I am. Then the 30 Days of Jung series I wrote. Then the yoga retreat. Then the beach with my cousin – we are like sisters who don’t fight, she said, laughing. She has three sisters, whom I love dearly; I have no sisters. My mother had no sisters. Her aunt had no sisters. I am the end of the very short line of “daughters with no sisters born of daughters with no sisters” in my family.

Last night on another business call with my uncle, her last surviving brother, I silently sobbed as he listed off the churches and other logistical content. I couldn’t hold it in anymore.

“Do you think she knows I loved her? Pete?” I asked, pleadingly.

There was a patient, knowing, loving, tender pause.

“Your relationship was complicated, but I can say this without a doubt for it is told time and again everywhere: One can not experience that depth of intensity of feeling without love.”

It helped. He always says remarkable things. He is someone I don’t keep in touch with, but our bond is deep and real. He is my mother’s brother. He knew her best of all, she adored him. He was her go-to.

I mourn her loss. My loss. The loss. Yet I know, that if she were to call me today, if everything were the same, if she were not dead, that I’d not be interested in talking about Robert Preston and his role in “The Music Man” or Judy Garland in “Meet Me In St. Louis” — I just wouldn’t and I would be annoyed that she would insist that we talk about it. This is how we were, but this example is a microcosm of how we were; so many different perspectives, views, interests and ways of living. It wasn’t impossible, it just wasn’t always possible for us to be reading from the same sheet of music.

I fought valiantly, irrationally, desperately as a child and young woman for her sobriety, health, presence. I never gave up, hoped forever probably that she would pull through, change, improve … deliver her intentions. It might’ve been folly, but that was my charge. I never gave up; even last week, I kept the heat on her improved condition, even if she was against it.

I just got word that my mother will be celebrated in the church where she received her First Communion, Confirmation, Marriage — and so it should be, her death. I fought for it. There was an objection: bigger church, more people, better parking. “Fuck that,” I thought. “Rest her soul in the place where her DNA is. Her parents were married there for Christ’s sake. It’s in her ecclesiastic DNA too.”

I won that battle. I served her. I hit it out of the park. I am Over The Moon. She will be buried near her favorite aunt with her son who never lived past three days. Her circle is completing. She is being honored. I may have been a difficult daughter in her lifetime, but I will be damned as I sit her typing, if I am not going to fight for her honor in her death.

Rest in peace, among the angels, Mom. Get the truth on that whole “Who really wrote Shakespeare’s stuff,” will ya? Let me know.

I wrote about her here: The Eccentric Aunt.

And this, is my absolute favorite ever: