Hello! I hope everyone in the U.S. enjoyed their Thanksgiving holiday.

It has been a while since I’ve written anything regularly. The last series I wrote with any daily dedication was the 30 Days of Jung where I took a quote of his and did my lay-person best to make sense of it while sitting in my cheap seats. I had a great time with that series and considered myself developing somewhat of a niche: the self-effacing, occasionally humorous psychology nut.

I fancy myself a writer and I love to do what all great writers say to do in order to become a great writer: read great writers. I love reading other writers, I love writing about them, I love imagining how they decided to come up with that phrasing and how I feel so merely mortal when I read it.

Because my life radically changed on Labor Day when my mom died, I fell off the writing horse, so to speak, in terms of being my old self; partly because I felt my old self was gone. One of the ballasts of my old self had died. In short: I was exquisitely lost, but I knew I needed to write about it. So I did.

Then I started to feel self conscious, as though all I was writing about was grief, and Mom and me and grief. I didn’t want to be a downer. So I changed my tune, perhaps a little too early or perhaps even announcing that I was changing my tune was something I shouldn’t have done. (More about my penchant / need for intention / purpose soon.) I regretted it almost immediately: that I shared my decision to stop writing about my grief, but I also knew that I needed to shift gears. I didn’t want to ignore it but I also didn’t want to focus on it.

It was all so hard. Is so hard.

Which brings me to right now.

I loved the Jung series. I feel it prepared me for the yoga retreat which ultimately prepared me for Mom’s death (I’ve written about that dovetailing in a post called “Wahe Guru“). The Jung series was regular, predictable, something I could count on being there, so I find myself needing and wanting that anchor again. So now, I’m going to start 30 Days of Brené Brown, whom is a modern-day philosopher of sorts. She is my “if you could have dinner / evening out with anyone you don’t know who would it be…” -person.

As with Jung, I selected the quotes as ranked on Goodreads by readers whom I believe highlighted the quotes in the books on their ereaders which were then uploaded onto Goodreads because Amazon owns Goodreads and everything between Uranus and the Degobah system (apologies to George Lucas). Each per-quote write-up will be in the neighborhood of 1,200 words (don’t ask why 1,200; it seems to be the point at which I start to run out of gas and I think you do too). I am picking 30 Days because well, why not?

This is “Day 0” — where I’m letting you know. It’s almost 10:00 pm where I live so I don’t plan on writing via Brené tonight although I can’t wait to get started. I also don’t want to jump right into this without sharing a little about my Thanksgiving, as I’m guessing both of you are curious about how it went this first time without Mom. It went well. It was momentarily bittersweet and graciously easy. We seem, as a tribe, to be navigating these waters with relative steadiness and patience for one another.

My brothers and I all recognize that we all had different “versions” of Mom, just as how my sons will have different versions of me based on our chemistry and relationships (although my relative health and awareness is vastly different from Mom’s to my brothers and myself).

In the early stages of our grief it felt to me that we clung to our various versions of her as though they were buoys. I am the middle child and I’ve got four years between my brothers and myself, so even those four years create quite a crevasse in her own personal development, any major challenges notwithstanding. Everything I have read about birth order and timing of children suggests that a span of four years or more between the children creates a space where each child is virtually an only child in terms of parenting attitude, fatigue and sibling relations. That theory was both myth and truth in those first posthumous days. I’d never felt closer to my brothers in those first days while at the same time I felt very separate.

While I was fiercely drawn to them both, I was reluctant, to tolerate either of their versions of her. I accepted the notion that there could be different versions, but I didn’t want to debate them or hear about them. I felt it was essential that everyone see her as I saw her, which (especially in those first days) was completely as the flawed saint and alternately undefinable. As time wore on, and we shared with each other more, the different versions became as real as the differences in our own persons. Mom occupied the same body, but she was in different places with us energetically.

This Thanksgiving holiday was the first time we were all together again since Mom’s funeral. For me, it had an almost challenge-like vibe: “We Will Get Through This 2013” — I should have made t-shirts. I was girded for anything and that girding was unnecessary. Having an adorable drunken-sailor -esque toddler bounce about the house wielding my sons’ various light sabers and make his own sound effects on top of the ones the sabers already make was a definite spirit lifter. 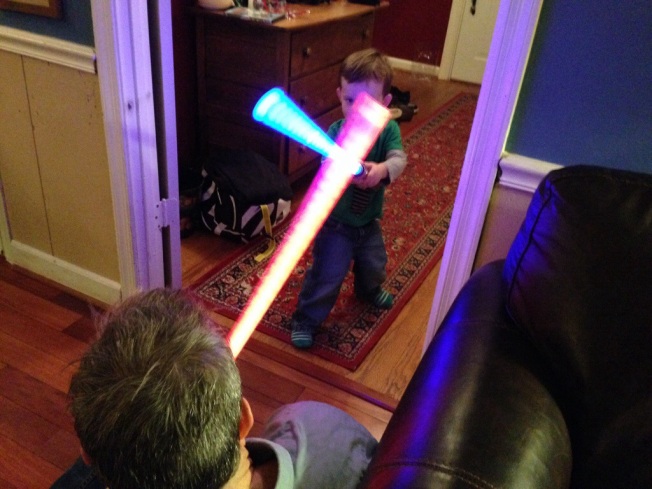 For me, it was nice, especially to have everyone in my house. Even though we have the world’s smallest kitchen, I loved it. Coming from a place of mental preparation helped too because I was ready for the “break” from the confusing drama and the heavy emotions that so often accompanied major holidays in my family: for so many years, the attention and energy were sucked away by fear and confusion over Mom’s condition. This year, we could focus and  share and enjoy each other equally throughout the long weekend — that was a first and at times it was for me a little disorienting, but welcome nonetheless. We are all a little crazy, as both of my brothers have said to me and each other since Mom died. We have our quirks and unmet needs and we will always do our dances around each other; that’s natural — dysfunction or not — but there was no heaviness or fear.

As I pulled away from my brother and his team at the airport today, I caught a glimpse of my beautiful niece looking back at me in my car and we smiled and I waved hesitantly, I wasn’t sure she saw me so my hand went down as soon as it went up. A lump formed in my throat for her because I realized what was happening: they were going home and I already missed her, I missed them all.

In the final analysis: Mom gave us to each other as siblings and we figured it out somehow. The next thing we did was find impeccable mates, some of the strongest people in the world for our weirdnesses individually and collectively — they loved us enough to marry us, knowing where we came from. No one is perfect, but we’re good with that.

So the first Brené Brown entry will start tomorrow, December 2. I hope I will hear from some of you in the comments section. I often say that the comments areas to me are where some really great conversations can be had. It’s a real treat for me to be able to exchange ideas with you.