Last weekend was like any other weekend, save for the fact that I ended up performing tasks that were not on my to do list. Usually I just don’t do anything. I like to read and exist and respond to life rather than constantly DO SOMETHING. The weekdays are for that.

Two evenings prior, we had guests over and our deck was dark. We didn’t go into the hot tub, as we might normally, because some of our guests weren’t interested. So we sat at our table beneath our 9′ deck umbrella and strained to see each other by the glow of three table-top candle lanterns.

So the next day, I did what I’ve been meaning to do: I went online and looked for light kits for our umbrella. When we lived in our first home, we had a patio umbrella that I strung up with lights. Then we had a baby. And then we moved. And then another baby. And then another. And then all incidental and whimsical ideas went by the wayside, except sex, clearly.

Fast forward 14 years and we were faced with a situation that we’d spoken of many times but simply never managed: the light scheme for the deck. Our deck has railing lights (they’re about as effective as fireflies) and flood lights (air raid!).

The light kits available in catalogs are mostly battery powered (weak), solar (weaker) or LED (WHITE LIGHT THAT IS FAR FROM SOOTHING!) illuminated.

I was dissatisfied with all of the commercial options. So I did what I did years ago: opened up our big 9′ umbrella, took it out of its stand, opened it up, leaned it against the table so I could access all panels and spines, cleaned it (oxyclean and a scrub brush) and then installed a string of white tiny-bulbed traditional Christmas tree lights.

I ended up using 400 bulbs (4 lines). THE UMBRELLA MUST BE OPEN as far as you can open it — I CAN NOT STRESS THIS ENOUGH.

You start at the center top with the female end. 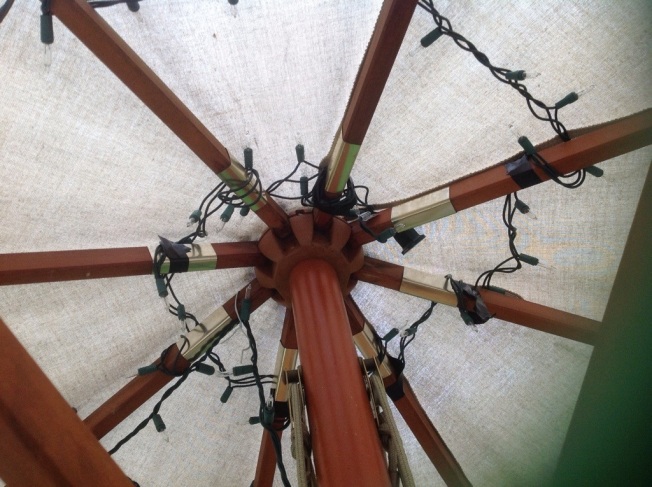 As you can see from the photo, I wrapped the line around each spine between the umbrella fabric (yes, inside the umbrella — I feel compelled to say this because … well … some people …). The first line went about three times around the inside of the umbrella. We plugged in the next line to that first line and continued our journey.

Leaving a little bit of slack (although it’s not really necessary because your umbrella is open all the way), continue to wrap your line around each spine and bolster that with electrical tape.

But Molly, why should I wrap my line around each spine and double it up with electrical tape?

SO IT DOESN’T SLIP, friend.

At some point, you’re going to run out of line faster than before (because the design of an umbrella (or radius) dictates that as you go out, your spines are farther apart than in the beginning of this adventure) and you’re also going to want to power the thing, right?

Leading the line back to center: So when all you’ve got left is about 12′ of line left, come back up a spine with your line (sounds like a dance tune) by running that line between the fabric and your installed lines to keep that final line close in. Then run it down the pole.

If you’re like us, you have to drill a hole in your table (providing it’s wood –see pic above one more time) to get the line beneath the table to connect it to your ready and waiting power supply. 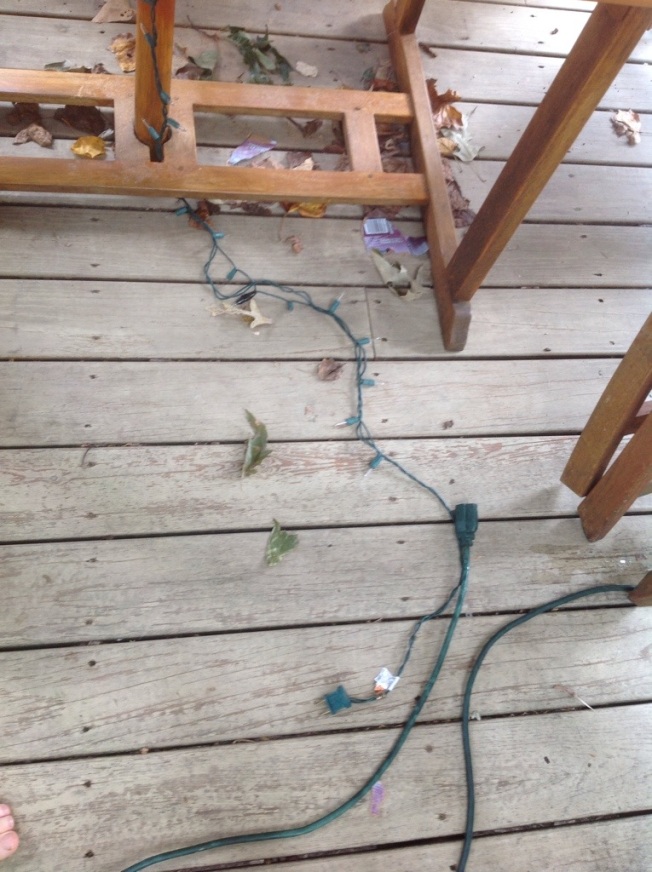 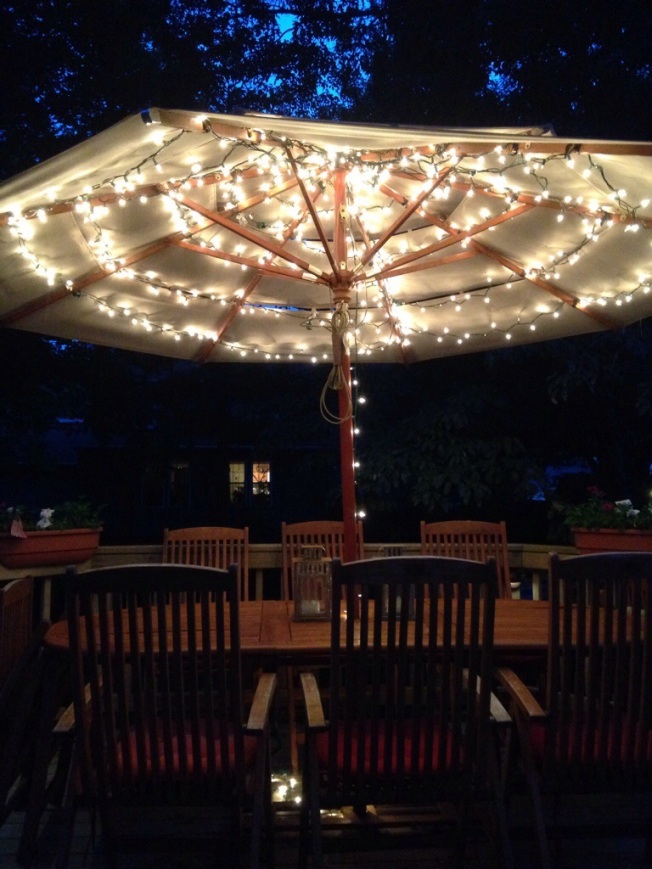 Again, we used four 100-bulb lines on our 9′ umbrella and it’s plenty. I was actually on the fence about maybe it being too bright. The good news, is that you can unplug a line from the center first line if you wonder. And I have to add this: the golden light from these little bulbs is very gentle on the eyes.

Enjoy your starry evening; it’s a magical place when you’re under that umbrella and the creativity flows; you are your own Vincent Van Gogh.

Welcome to Day 27 of my blog series based on Judith Hanson Lasater’s “A Year of Living Your Yoga.”

I try to keep these posts to about 500 words.

Here is the quote:

April 21 — Let go into your strength. We think that strength is about being able to push something away or hold something back. We have great reserves of strength, which can be used in different ways. Inhale, and let go into the strength you already have to do Adho Mukha Vrkasana (handstand) or to create an hour with no commitments.

I’m not gonna fib here: handstand is not easy. For many reasons, but most of all, it does require a great deal of upper body strength, core awareness and emotional guts. The pose should be started at a wall for best results the first few times. You’re in downward facing dog, getting used to being inverted. Then you tip-toe your feet to be about a foot away from your hands or make it so your hips are almost vertically above your shoulders. Then you play with your balance a little by kicking up (gently) one leg, then the other leg. Doing this helps you understand which leg is your “push off” leg and which leg is your anchor. When you’re familiar with that and feeling safe (next month), then you really push off with the kick-off leg and you aim both feet for the wall.

Forget about the pressure in the shoulders it will be there the whole time. Instead, do something with them:  “press” them to reach toward the hips (so now that’s “up”) and pull in the belly. Breathe. Sense the blood flooding your body in the opposite direction it’s used to going. If you’re still up, YAY! Come down and fold into child’s pose with your knees wide and your big toes touching, hips sinking toward the floor for a few breaths. Try it again if you’re game. Just remember to go back to child’s pose when you’re finished.

My issue with handstand is that I go too far over. I have the strength to stand on my hands, but I still lack the poise to control my thighs from going all the way over. I need the wall, but I’m getting better at it. I also think it’s a matter of context: when I’m all alone, I have an easier time, but when I’m in class as a student or a teacher, I feel stressed and I goof it.

So the strength in this pose has more to do with initial control and poise than it does staying in it. It’s like that moment when Scarlett O’Hara walked into the party after her scandalous kiss that Rhett saw her give to Ashley Wilkes… she possessed great strength to go in that room (I think she was also a total jerk for doing what she did) after that kiss, dressed like a harlot. Who possessed more strength? Melanie Wilkes. Class act, that Miss Melanie.

this moment. i loved scarlett’s moxie, but melanie was really the winner.

What does any of this have to do with yoga? I guess a lot. If you’re in my head.

The point of it is that we often see Scarlett as this super-strong, super resilient woman; and she was. But she was also a total antisocial, histrionic bitch. She thrusts into situations, being strong, surely, but not at all poised and controlled.

Melanie, who was a calm and controlled person was not a fool, I’m sure she knew what was going on. She just possessed more couth and courage.

So going into handstand or … s I said when I started this post, ‘I’ll take ‘create an hour with no commitments’ for $400, Alex.”

That’s hard too though — to allow an hour with no agenda or no feeling for the need of an agenda or activity. I think that’s the thrust here: to have the strength of self enough to let go of the need to do something of “value.” It’s our egos which tell us we have to be doing something all the time; its our brains and minds who need the rest.

What would you do? Read? Nap?