I plunged a 9″ chef’s knife into a watermelon just now and cut a bunch of quarter slices. I’ve had the melon on the counter for about five days and completely forgot about it and the fresh pineapple I bought over our family birthday-Labor Day-Mimi’s death-anniversary weekend. I just tossed the remains of the birthday cake. My mind has been elsewhere. Waiting. 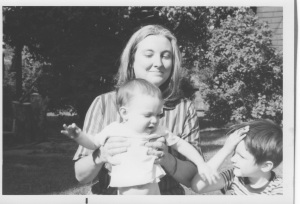 this is mom holding me in 1968 after i clearly just swatted my older brother. poor guy…

I thought I could deal yesterday. What I did yesterday however, was read. I holed myself up on our deck and read all day after I wrote my post about “clarity.” I see the irony now. When Mom died last year, the day was mostly ebbing. It was just around 3pm when I got the call from Dad, so all our plans of having a home-base Labor Day cookout were toast. No pun intended.

So I guess, you don’t experience the anniversary until you experience the anniversary. Of anything. I remember this after 9/11. Up until the one-year, I remember noticing how my body was gearing up, feeling the angle of the sun and other astral, silent and all-knowing familiarities which unrelentingly tie you to a trauma or event. I don’t remember the date when I saw Bruce Springsteen for the first time, but I remember where I was and what I was doing when I heard about the Towers.

And this is my first go. I have no clue what to expect, other than to know (now) that expecting anything is a waste. That it happened on Labor Day is just … well … what it is. I could judge it all I want. That’s stupid too, judging.  I’m so grateful to my husband though because he called me in the middle of writing this post to check on me and to also assure me that next year, Labor Day will be on the 7th and that’s great. I’m really looking forward to next year because the anniversary day and the holiday will be far apart.

That evening, last year, I went for a root beer float at the nearby Baskin-Robbins 31 after viewing her body. I bought two. I don’t know why. I decided yesterday morning, that yesterday was going to be a reinvention, a rebranding of Labor Day for me because last year’s was so traumatic. I was almost literally holding my breath until about 3:30pm. Once we passed that timeline, I had no choice (I suspect) because it was all I could do to not compare: “It’s 3:47 and no one has died. Keep reading.”

I realize now, that our human invention, denial, is really one of the stupidest inventions we’ve ever … invented. Don’t pay the taxes and they’ll go away. Don’t sweat the addiction and it will get better. Don’t cut the watermelon because nothing’s going on.

MY KIDS. “Tomorrow,” the day after Labor Day, was their first day of school. My brother and his pregnant wife showed up. That was hard. My oldest son had told my brother about Mom. I gave the other root beer float to my sister-in-law.

As the sun set, I’d been at the hospital four hours; I stayed with my brother and SIL one more hour and then I was going to leave. My brother was there for Dad now.

The attending ER doc for that shift needed my dad to sign Mom’s papers so he could go home. I’m sure the staff would’ve waited and Dad could’ve signed them later, but … it was all a little surreal… he sort of y’know, a’hem, nudged us to y’know … sign. Release the body to the morgue. Let Mom go. I’m sure I wanted to ask him, “Has your mother died yet? Or your wife of 51 years? This shit’s not easy. … Just checking.” Of course the doctor didn’t want to nudge my father in his understandably granitic and unreachable state. No one nudges my father.

As I started out, a nurse gave me Mom’s things: a bag of her jewelry to take from the hospital, so I did. In a white paper envelope was her passport (WHAT?). In a white double-plastic bag with those hard plastic snap-together handles were other effects including pants and the navy blue cashmere vneck she was wearing when she was transported via ambulance; it had a few of her stray silver hairs on it. I’m still trying to figure out what she was doing with her passport. It’s so odd. Inside that white bag was another bag containing her jewelry.

When it came to jewelry, Mom was … thorough. As she aged, her OCD really ticked up and she began to trust no one, very little of her nursing aide. So she wore a lot of her valuables. I think whenever Mom weighed-in at her doctors they must’ve just assessed her pirate’s chest of bangles and ancestral baubles and just let it stay; the hell with it. To take it off her and put it back on her would’ve added 15 minutes to the visit and she’dve never let any of it out of her sight. So the bag I was given must’ve weighed about three pounds. But seeing that bag of her favorite things, her “stuff” reduced to a hospital-issued ziplock emblazoned with “INOVA FAIRFAX HOSPITAL SYSTEM” … It was all too much. So I left. My husband and I left for our house.

I had to retrieve my children from their various locations. I had to put my kids to bed. I had to hug them. Inhale deeply and smell their heads, squeeze their bodies and wipe their tears, and press my forehead into theirs as I held them by their jawlines and tell them through tears and sniffles I was sad but that it was all going to be OK and that Mimi was in a better place now and that even though it doesn’t feel like it, things were really going to be OK in a few …

So later that night, around 10:00, Dad, my brother and his pregnant wife showed up at my house. I’m not sure when they left the hospital. It was a way station, I guess. I see my deflective madness: that whole plan, to have Dad not sleep here, but it was all I could deal with at the time. “We are animals in moments like these,” I remember thinking to myself, rationalizing.

My brother and I rallied and took Dad back to his house to get some things for the overnight. Dad stayed in my car. It was then that I saw the plate of uneaten breakfast on her side of the bed. She wasn’t feeling well that morning. Dad knows this now, but the signs for heart attack or dire cardiac trouble for women are totally different than for men. We don’t feel tremendous pressure, as though we have an elephant on our chest (that’s a normal feeling for us), we feel sick, nauseated and generally weak and profoundly unwell. Sadly, these symptoms also remind us of fatigue and gastrointestinal distress, from which Mom suffered a great deal. But it was unrelenting, this discomfort, but she didn’t want to go to the ER, she wanted to get ice cream. Dad obeyed; they were going to get ice cream. Then she fell.

I knew that logistically it was best that Dad be here with me, because I live the closest to him and Mom, but … I’d been on this task for almost eight hours by this point. I was also not rational: I was terrified, frankly, that her spirit would come to my house looking for him. I wanted to reduce that liability. I was also comPLETEly terrified that he would live here in his grief. I wasn’t ready for that. I wasn’t able to deal with that. I was and can still be a selfish person (I learned from a very early age that relying on others was a precarious endeavor, so as much as I’ve tried to stay aware of it, primal moments like these can make me unhinged, so I go with “selfish”).

So I dug in my heels and it was just me and my team in my house that night. Of the immediate surviving family, I knew that no one would be really getting much sleep that night, but I didn’t want it all here. I also knew my home was going to be ground zero for the next day or so. I just knew it. Dad went home with my brother and his pregnant wife.

The next morning, my other brother flew to DC and we started to rally. That afternoon, Tuesday, Dad and my younger brother came back to the house and we continued and combined our own singular efforts to have Mom celebrated in five days. Out of state. Five hundred miles from where she died. We did all this on my deck with our various laptops, iDevices and phones. We did all this amongst the buzz and presence family and great friends who couldn’t suppress their support for us and their instinct to lift us up in our loss. I see now, a year later (and I sensed then but didn’t really have time or interest in indulging in the time) how Herculean that entire effort was, but true to form, we achieved it. We were like a newsroom.

I needed to write about this today. Fighting these urges to write and share is “crazy talk” as my brother would say (jokingly). I simply couldn’t have had a normal (ha!) day without doing it. Maybe reading this is even helpful to you. I have no clue about where this train will stop. I see now that it’s an unrealistic ambition to say ‘On this day I will end my writing about Mom and my memories of her and my life.” New stuff or old stuff in new suits occurs to me daily. I didn’t sleep well last night; I was afraid she’d visit me. When I did wake, I was sweaty and unrested. So I needed to flush some things out. I feel better now. I always do.

Processing… It’s part of my recovery to allow myself to look back on that day and then see 1) it’s over and 2) how far I’ve come. Without that perspective and ability / allowance to reminisce we would be lost.